Is the Internet driving us to distraction?

My father died before the computer age really began. I was a young man during that bleak winter in 1982. Imagine my guffaws if you had told me then that within 15 years, everyone would own a personal computer vastly superior to the one they used for the moon landing, and that within 30 years, the hunky beast would shrink into a tiny device called a “smart phone”? And that we would spend all of our time interacting with something called the Internet, which no one understands but nobody can live without?

As Paul Harvey might have said, what actually happened is “the rest of the story”.

Does anyone really remember the rest of the story? It comes to me in flashes: 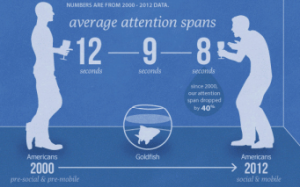 Where are we? For one thing, we are riding the wave of an explosive information revolution. That sounds both threatening and exciting. Until you do a search on the Internet and get hustled and lied to by people you will never meet (thankfully).

Everything I get off the Internet is chronically broken and over-hyped. Even when it’s free, it’s a bad value, because it takes too much time to manage. That’s because the only way for companies to get attention is to offer something for free. They can’t spend any real energy on it, so the thing they produce is more Internet junk. They also don’t have the time or money to support it. So they sell it through their clinched teeth and hope for the best.

So much information is now being published that no person could ever consume it. But why would the want to? To purge their stomachs? Look at the advertising for Search Engine Optimization (“SEO”) services. These companies claim that they can get your website ranked high enough to attract real traffic and maybe even hustle a few bucks for yourself. But how? Oh — they just create a bunch of dummy content packed with keywords, and have all that tie in to your website. Harmless stuff, right? Unless you use the Internet. Talk about putting a fire out with gasoline!

We have grown so accustomed to the assault on our sense by television, radio, and now the Internet, that we no longer actually feel it is worth our time to listen to any one thing with any priority or patience. It’s all garbage to our brains at this point, so the only way to cope is to give less and less energy to any one thing at one time. Doctors used to refer to this occasional malady as Attention Deficit Disorder (“ADD”). Now it’s just being alive in the 21st century.

Welcome to the Something-for-Nothing Generation

So what does the future hold for a society driven by its own impatience to get more and more out of less and less focus?

This site uses Akismet to reduce spam. Learn how your comment data is processed.